I have been researching (as I usually do before giving an informed opinion) and reading the dozens of eyewitness reports (people actually at the Rally) that are showing up on many diverse websites and blogs. Based on the info I have read so far, this is what really happened and there is a video taken by the National Guard that would prove it.

-The alt-right wing organized a peaceful assembly
-The organizers obtained a permit to assemble
-Wes Bellamy, the Vice-Mayor of Charlottesville, illegally revoked the permit for this event.
-The ACLU sued Charlottesville for violating the First Amendment, and the permit was reinstated by order of a Federal Judge
-At 11:30am a half hour before the rally was scheduled to begin, a heavily militarized police force illegally shut down the event with physical force

That was the time line leading up to the time the Virginia State Police (VSP) declared the legally permitted rally an Unlawful Assembly (ignoring a Federal Judges order) and told the Alt-Right group to leave or be arrested. Here is what took place afterward. I have marked the relevant spots by large white numbers. See the photos attached.

The Alt-right groups were in Pen 1 and 2 peacefully assembled and waiting for other to show before the speakers started the rally. #1 and #2 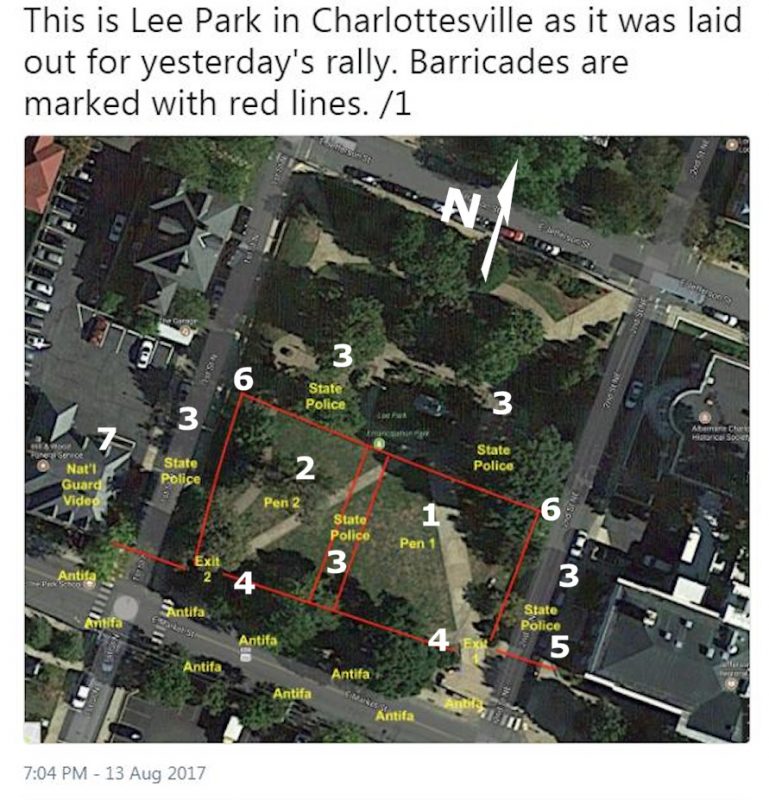 The VSP #3 were on the North, West and East sides. Also in the middle of the Pen. The VSP entered the pens from the north and began to drive the Alt-right people out of the South Exits #4 directly into the Antifa and BLM mob that was armed with Flag poles, shields, metal baseball bats, metal pipes, billy clubs, mace, bear spray, rocks and bags of urine and feces.

The alt-right people had to fight for their lives as the VSP drove them into Antifa and BLM mob. #4 Even forming a shield barricade to keep the alt-right from escaping to the North once out out of exit 1. #5

They could have let them exit to the North or East away from the Antifa and BLM mob where they would have been protected and able to peacefully leave the area. #6

The Antifa and BLM were given their own areas (NO PERMITS) in Justice/Tessler Park and McGuffy Park well south of the alt-Right area yet they were allowed by the VSP to leave their area and approach the south barricades armed and ready for violence. No VSP were on the south side and did not attempt to get between the 2 factions.

See photo of the Antifa using a makeshift flame thrower to attack the alt-right attempting to leave by exit 1. Forced there by the VSP behind them pushing them forward with shields and force. 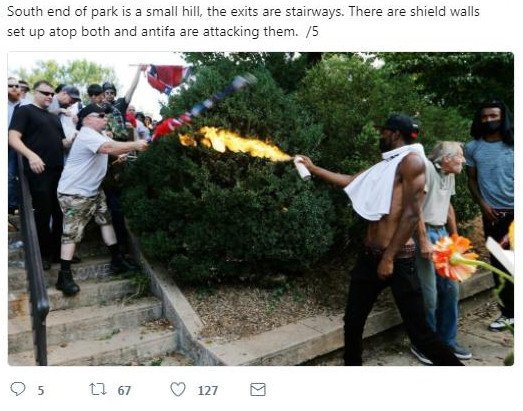 The alt-Right had no choice but to defend themselves as they were driven in small groups directly into the Antifa and BLM mob. This went on for over 1 mile as the alt-Right group tried to get to their vehicles completely unprotected by the VSP.

After the alt-Right was forced to leave their pens a State of Emergency had been declared and they were advised to leave Charlottesville completely yet the Antifa and BLM were allowed to roam the area looking for trouble and harassing anyone they could find. This includes the driver of the car that smashed into the crowd killing a woman and wounding others.

It makes me wonder if he stepped on the gas to flee for his life. (remember Reginald Denny in L.A. riots of 1992).

There is a video taken by the National Guard that was stationed on a roof top on the west side of the pens. #7 See photo. 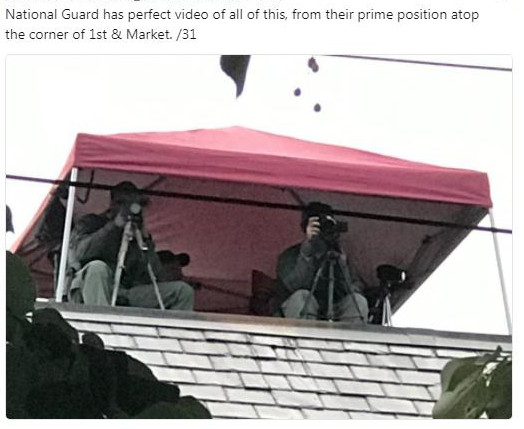 My conclusion: This was a setup from the get go. The alt-right organizer has been outed via his social media and other reliable sources as a previous supporter of Obama and was a member of Occupy Wall Street. He had nothing to do with the alt-Right movement until establishing his white supremacist group “Unity & Security for America” in January, 2017.

This stinks of a conspiracy by the radical left, Democrats and GOP never-Trumpers in America to give the Media, the liberal socialist and the Democrats the opportunity to try to paint President Trump as a right wing racist and change the national narrative away from the failed Fake Russia smear against him.

This is just one more step in their attempt to oust President Trump by any means necessary. It is a Coup d’etat that is taking place.

THIS NEEDS TO BE INVESTIGATED TO THE FULLEST.
The Gov. of Virginia (we all now where his loyalties lie) should immediately release the video taken by the National Guard.

Independent media needs to get all over this and President Donald Trump and the DOJ need to be open and forceful in calling out these conspirators,

Are we nearing the time for Patriotic Americans to instill civility back to our streets?

ARE THE DEMOCRATS WILLING TO DESTROY AMERICA IN THEIR QUEST FOR POWER?

What the heck is Socialism, Communism and Fascism?

Free1st 5 RulesPlease follow these rules so we can maintain your right to self censorship.